The Music of Terchová is an orally cultivated musical culture of the community of Terchová which is known for its original collective vocal-instrumental performance. The phenomenon of the Music of Terchová does not apply only to the typical instrumental body with a little two – string bass, but also to the entire relevant musical tradition. It is only complete when complemented with a singing repertoire, a folk dance known as terchovská krútená or čardáš (a typical rotating dance) with its own musical style and performers by whom it is perceived as a key part of their cultural identity and a product of their spiritual equipment. The ﬁrst direct evidence of the existence of the Music of Terchová dates from the turn of the 19th and 20th centuries, when a 3 – member band of Terchová called Kvočkovská muzika was active in the settlement of Kvočkovia. As early as 1935 Franc Balát’s Ištvaniarska muzika music of Terchová had been recorded both in word and in picture in director Martin Frič’s ﬁlm Jánošík. Lots of recordings of the Music of Terchová have been preserved on different media, including sheet music collections.

The element has been inscribed on the Representative List of the Intangible Culture Heritage of Humanity in 2013. 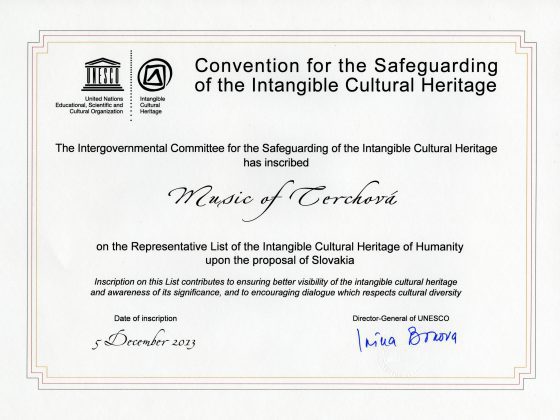