Fujara – the Musical Instrument and its Music

Fujara – the Musical Instrument and its Music

The Fujara, which is typical of central Slovakia, is an exceptionally long pipe with three touch holes. The Fujara was included in the List of Masterpieces of Oral and Intangible Heritage of Humanity in 2005 (Today it is a part of the Representative List of the Intangible Cultural Heritage of Humanity). The sources concerning the history of fujara consist predominantly of written evidence. The oldest use of the word fujara which could be considered as the ﬁ rst reference to the fujara as it is known today, is to be found in Bruk’s manuscript miscellany dating from
the 1780s. From the beginning of the 19th century, the word fujara began to be used more frequently as an unambiguous term for naming the present-day’s instrument. The Fujara has a more speciﬁc musical repertoire than any other musical instrument. This is due to its role in the life of shepherds, its relation to the shepherds’ and highwaymen’s element, the musical and technical properties of the instrument, as well as its onomatopoeic use of tones in high positions. Every single musical instrument is the reﬂection of the unique properties of its maker and performer. 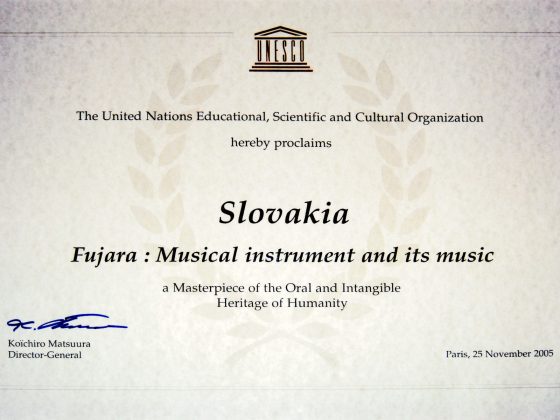