Initially the Salamander Parade was a festive procession of students and ofﬁ cials of the Academy in Banská Štiavnica on particularly important occasions. It was shaped during 150 years of historical development of the Mining Academy in Banská Štiavnica (established in 1762) – the ﬁ rst mining school in the world. Today the Parade is a part of Salamander’s days – traditional city festival associated with celebration of the Day of miners, metallurgists, geologists and oilmen in the whole Slovakia. Thus the Parade became an identiﬁ cation sign of mining in the city and its vicinity. The name of the procession refers to serpentine movement of a lizard – spotted salamander. According to a legend about establishment of the city, a shepherd discovered lizards with golden and silver dust on their backs up in the hills, which initiated mining in the area. The actors of the Parade move according to a rhythmic pattern from one side of the street to another to imitate the movement of salamander. The procession retrieves famous historical events of the city, demonical beings associated with mining works underground as well as personages of social life in the city. 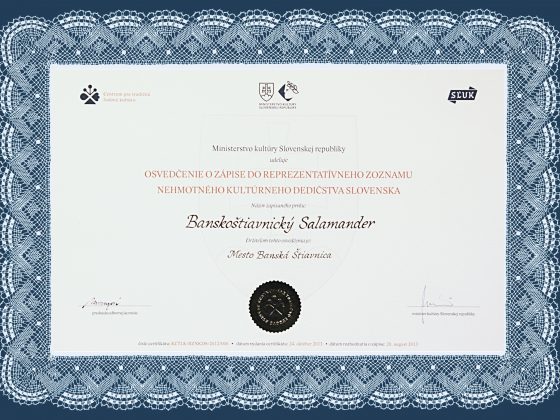