The villages of the Horehronie region are distinguished by an astonishing richness of traditional folk culture. The folk multipart singing belongs to its most expressive and constant manifestations of this folk culture. In Slovakia the folk multipart singing is considered to be characteristic of Horehronie localities. Interpretational nuances and performance of tones in the villages on the upper flow of the Hron River (Šumiac, Telgárt, Vernár) differ from those in the villages on the lower flow. In the lower flow villages the performance of the multipart singing in Pohorelá is similar to the performance in Heľpa, and the performance in Závadka is similar to that in Polomka. The forms of folk vocal culture have been significantly influenced by natural conditions. Singing in the hills or meadows during work required a very intensive throaty technique resounding far and wide as well as audible polyphonic consonances. This kind of singing tradition was linked to people’s assertiveness and vitality through a part of the shepherds’ way of life that was brought into the region during Wallachian colonization in the 14th – 17th centuries. Moreover, the tradition of multipart singing is related to people’s religiosity: the vocal culture of Horehronie has been considerably influenced by spiritual songs, in particular in the eastern part of the region, where most of the inhabitants practice Orthodox rites. Apart from aesthetical and artistic value, the Horehronie multipart singing demonstrates people’s local and regional identity. 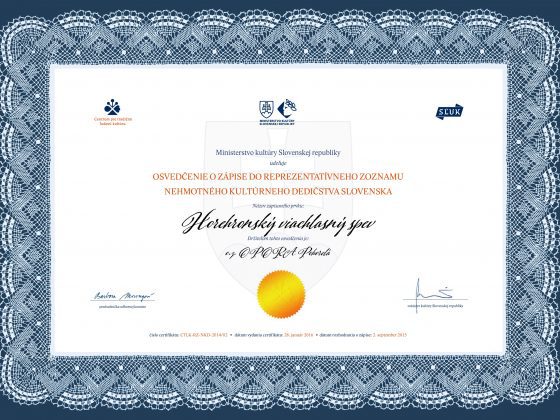 The element has been inscribed on the Representative List of the Intangible Culture Heritage of Humanity in 2017. 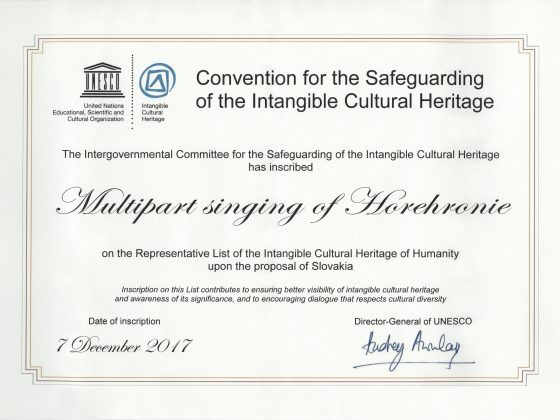