West Slovak pottery holds a prominent place in the Central European ceramics tradition because of its faience / majolica techniques (two terms referring to high-quality ceramic products that are identical from a technological point of view). It is linked to the 400-year history and activity of a distinctive community of potters with Haban roots in western Slovakia. After competition from industrial ceramic manufacture drove most pottery workshops out of business at the end of the 19th century, the traditions of western Slovak pottery were preserved in the Modra workshop established in 1883. This single enterprise became the fl agship for the western Slovak pottery tradition. Its products refl ected the shapes and decorative principles of the old local potteries as well as workshops elsewhere in western Slovakia. Since the end of the 19th century it has gone through many changes. In 1952 it became a cooperative “Slovak Folk Majolica” and from 1968 it was a folk-art production cooperative. The workshop put the Modra style of majolica and decoration on the world map. It raised several generations of ceramic craft workers and outstanding artistic personalities. It has demonstrated its sustainability through the potters who have learned their craft there and established their own workshops in the local area. Other organisations that have helped to preserve cultural continuity are the local civic association Slovak Folk Majolica and the Ceramics Museum in Modra. 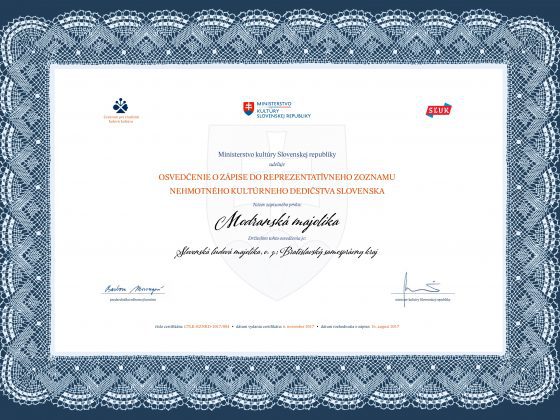