Husbandry of Lipizzaner horses at Topoľčianky

Husbandry of Lipizzaner horses at Topoľčianky

The Lipizzaner is one of the oldest cultured breeds of horses in the world. It was developed at the Lipica stud farm in the territory of present-day Slovenia to be a strong and elegant workhorse fit for royalty in the period when the Habsburg dynasty ruled all of Central Europe . The horses’ duties included carrying nobles on long journeys, and taking part in imperial court ceremonies and riding exercises for the nobility. The most intensive breeding was undertaken in the 18th century, which is also the period from which we have the oldest written records of Lipizzaners in central and northern Slovakia. The independent history of the Slovak lineage of Lipizzaners began after the establishment of the Czechoslovak Republic when the national stud farm was founded at Topoľčianky. The stud farm continued the cultural heritage of the Austrian school in its breeding programme, its husbandry practices and the way it cared for and trained horses. From the foundation of the stud farm, the core knowledge concerning livestock has been communicated orally. A secondary source of knowledge are the handwritten studbooks, which have been kept for over 90 years. Professional knowledge of horse husbandry is transmitted orally during the training process, in which a young worker is paired with an older one to ensure the transfer of experience. The husbandry of Lipizzaners can be understood holistically as all activities relevant to the breed. This includes everyday care for the horse – riding, cleaning, feeding, mucking out, care for hooves and horseshoes – which are activities that have been carried out and passed down for centuries since horses began to serve humans. It also includes training – learning to work with a trainer from an early age, more advanced exercises and training, the horse’s active years and their care in old age. The relationship between horses and people is important and requires long-term continuous work to establish trust and respect in which the horse is treated as an equal partner and not just an object to be put through drills. The skills for such work are handed down from generation to generation. The breeding of Lipizzaners is closely linked to varied traditions and expressions, social activities and ceremonies. 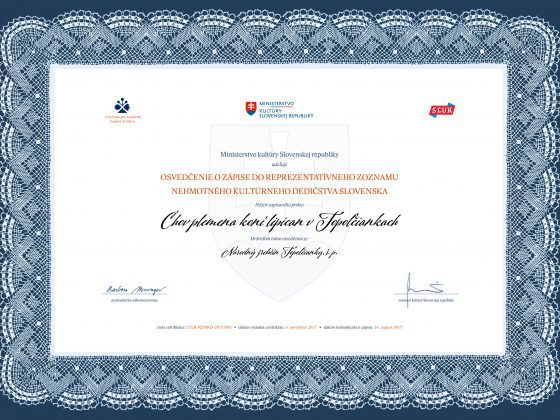