The fujara trombita is a pastoral musical instrument whose primary purpose was to send signals by sound in mountain areas. Special musical motifs could be used to communicate over long distances. It was occasionally integrated into polyphonic song and in modern times it has been used in ensemble musical performance. The design, manufacture, social application and musical significance of the instrument give it a central role in pastoral culture, which has deep roots in Slovakia. It is a conical wooden pipe without tone holes and it is at least two metres long. The name fujara trombita links it to the other long pipe instruments in the fujara family. It has a unique status among Slovak folk instruments because of its monumental size. Pipes of up to five metres long are not uncommon. Melodies are produced by overblowing for higher harmonic tones. As a result its communicative repertoire consists mainly of long-held tones and varied simple signal motifs. Because of its size and weight, it is mounted on a stand during playing. Although shepherds’ pipes and horns are widespread across northwest and northern Slovakia, the fujara trombita is closely associated with the Púchovvalley. The instrument’s sustainability in this environment is the result of long tradition of trombita playing and care for all the technical and artistic aspects of this instrument. Today the fujara trombita is an important part of social and cultural life in the Púchov valley and the art of making and playing the instrument is systematically conserved and developed. 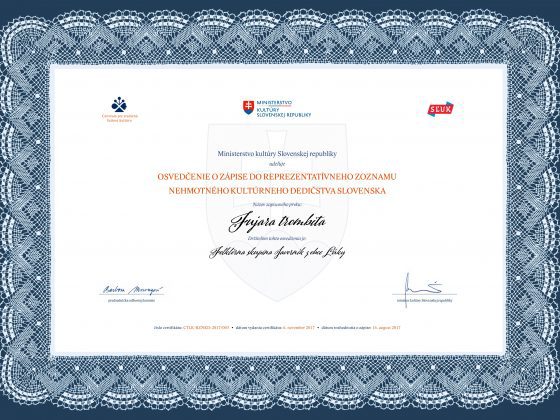