Rozkazovačky are one of the most typical folklore expressions of the Podpoľanie ethnographical region. They represent a special syncretism of music, singing and dancing. The word “rozkazovačky” (from Slovak rozkazovať – to order, command, request) is derived from the style of performing a song before playing music – the ordering of songs (“rozkäzovanie”). Singers direct the music by solo singing of songs, by shouting, and by setting the pace. They subsequently continue singing accompanied by musical instruments, often combined with improvised dancing (“cifrovanie”). Rozkazovačky used to be a male domain. Renowned singers have usually been good dancers as well, and have liked to show off – who would sing what song, who would dance better. The “commanders” tested the musicians’ skills and ability to play according to their wish. More dominant singers used to be among the first ones to request songs. An important role has been played by the individuality of the commanders and musicians, that from Podpoľanie pertaining to the most developed ones throughout the Slovak folklore regions. Until the 1st half of the 20th century, this element was handed down within local communities directly on authentic occasions, such as weddings, parting from recruits or dance parties (combined with annual feasts or the completion of works) with folk music, through inter-generational transmission by local singers and folk music bands. The existence of the large number of older as well as younger folk bands at Podpoľanie has largely contributed to the preservation of this element. At present, the rozkazovačky can be found mainly in the municipalities of Detva, Hriňová, Detvianska Huta, Korytárky, Kriváň, Stará Huta, Stožok, Slatinské Lazy, Vígľaš, Zvolenská Slatina, Dúbravy, Očová, Hrochoť, Poniky, Priechod and others, which are known for their folklore groups, folk music bands, and individuals who consciously develop dance requests as part of their own cultural heritage. An important role in maintaining this element has, until today, been played by the Folk Festival under Poľana in Detva. The local community and individuals within the Podpoľanie region consider rozkazovačky as part of their cultural heritage and identity, perceiving the links to their own history and the environment in which they live. In addition, dancing requests bear the values of tradition and the signs of mastery, competition, male power, art and skills, or an erotic context, which makes them interesting and attractive and enjoy extraordinary interest. 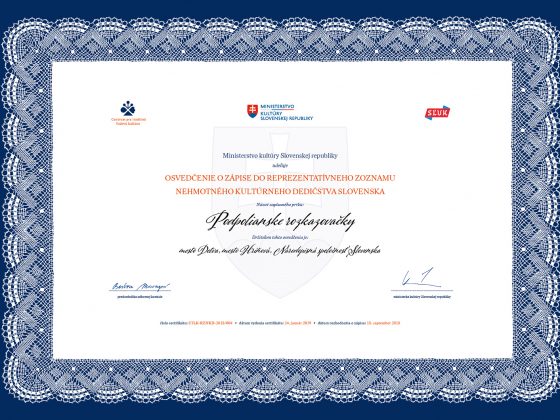