The word blueprint refers to the practice of dyeing fabrics blue with indigo and decorating it by waxresisting print, using dye – resisting mix preventing the colouring at the places of ornamentation. Blueprint has been an important technique in Slovakian as well as European traditions of textile decoration. It had been brought into Slovakia from the Netherlands and Germany during the 18th century. Initially blueprint was adapted in bourgeois circles. In the 19th century blueprint became a common element of folk textiles and dresses and developed into an exceptional richness of local forms adjusted to the tastes of rural inhabitants. They used to order blueprint fabrics in the workshops or to buy them at the fairs. Even in the mid-20th century regional diversity of blueprint ornaments and the number of blueprint workshops in Slovakia was high in comparison to other countries of Central Europe. More than thirty active workshops produced blueprint fabrics for rural areas where people still used to wear traditional dresses. The activities of workshops had gradually been reduced due to decreasing use of blueprint in dresses and interiors of rural households. The inhibition of private enterprise during the socialist period contributed to this reduction. Consequently the production of blueprint fabrics became the domain of cooperatives and the Centre for Folk Art Production that has intensively supported blueprint production until right up to today. The Centre hascooperated with the manufacturers and reinforced blueprint tradition as well as innovative forms of blueprint design. 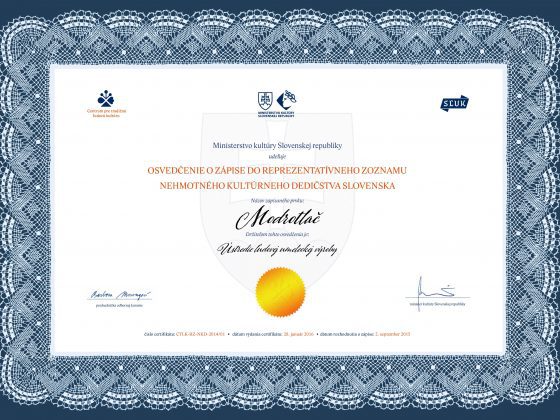 The element has been inscribed on the Representative List of the Intangible Culture Heritage of Humanity in 2018 under the name „Blaudruck/Modrotisk/Kékfestés/Modrotlač, resist block printing and indigo dyeing in Europe“. 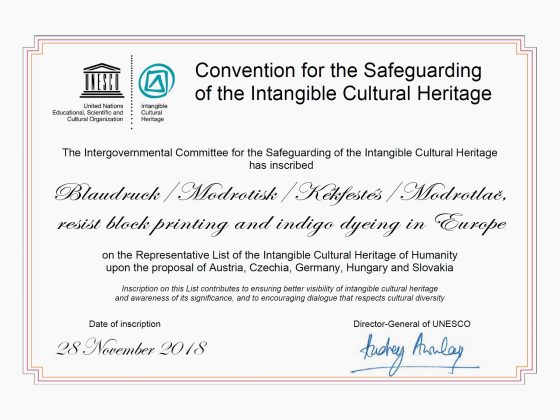