The “Aušus” Services of Špania Dolina Miners are represented by ritual practices dating from the 15th century. Since then they have been continually handed down from generation to generation. They include the miners’ feast, mass, wedding and funerals. Before 1787 miners also served in the miners’ militia. Miners, as free citizens represented a speciﬁc group of inhabitants of medieval Europe. They were quite educated, they were allowed to move about freely and they did not pay taxes. This allowed for the origin of multinational communities in all the mining regions of Europe. Miners’ brotherhoods were established everywhere. Apart from ceremonial rituals they also provided miners with social care. The oldest written document of the Miners’ Brotherhood in Špania Dolina dates from 1. August 1574. The seal of the Miners’ Brotherhood dates from 1683. 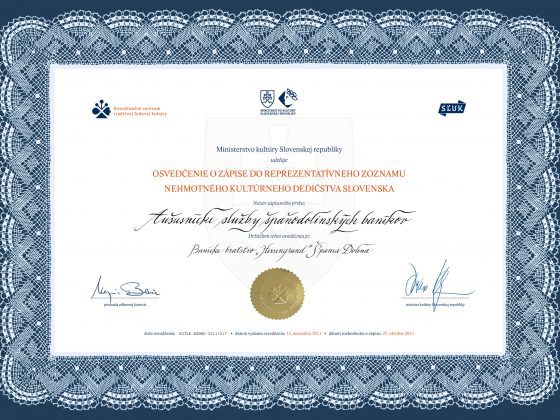