From the rich variety of ornamental styles that evolved in the territory of Slovakia during the 19th century and the first half of the 20th century, the Vajnory ornament is one that stands out the most. In Vajnory and other villages surrounding Bratislava, the Vajnory ornament inspired the decoration of embroidery and Easter eggs. Also, its use in paintings decorating interior walls of the rooms is quite remarkable. The local pattern painters, also called pattern writers, deserve credit for the development of the embroideries and paintings. In Vajnory, Katarina Bruderova (1882 – 1964) was the style’s most creative author. She advanced the local ornamental style based on a principle of a rhythmic repetition of fine-drawn dense plant compositions into more natural positions which were closer to nature and to liturgical symbolism. The Vajnory ornament has a thread of a decorative tradition that has never been interrupted in Vajnory. Up to the current day, creators actively maintain and develop the tradition in embroideries, on Easter eggs, on murals and on household goods. Vajnory residents demonstrate their admiration of the style by dressing in traditional cultural clothing on festive occasions. The local institutions also passionately strive to preserve and maintain the tradition. Citizen associations and many other entities and individuals are trying to sustain and encourage interest in the young generation in the Vajnory ornament with the goal of securing its sustainable development in the future. 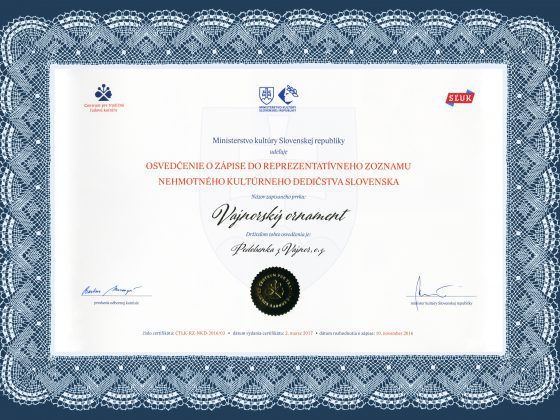