In the past small farmers and shepherds in many parts of Slovakia, especially in the more mountainous areas, were expected to know at least basic carving techniques. The Podpoľanie region was considered to have an especially flourishing artistic carving tradition. From the 19th century onwards, a major part of this tradition was the production of carved wooden crosses decorated using a relatively demanding bas relief technique that incorporated remote echoes of Baroque and Renaissance decoration. The Podpoľanie carvers developed a distinctive regional decorative style. Colour became an important element of decoration in the 20th century, which led to the crosses being described as merry. The centres of distribution of the crosses are the towns of Detva, where there is an exhibition of crosses in situ, and Hriňová and their surrounding villages. The number of recorded crosses is around 150. There is an admirable vitality in the carving tradition applied in the production and renovation of crosses, with skills passing smoothly from one generation to the next. Besides their original function as grave markers, indicating the deceased’s place of rest, large wooden crosses decorated with carvings are increasingly being erected at significant locations in the region as a symbol of loyalty to the locality and wider region. Their monumental appearance and distinctive hand-carved decorations have attracted attention from beyond the region below Poľana. They can now be found all over the territory of Slovakia and even abroad. They have become one of the distinguishing symbols of the Slovak nation. 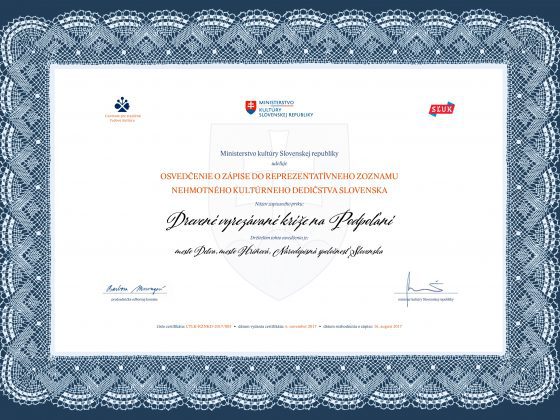