Wire craft was developed by itinerant tinkers who went from door to door repairing kitchenware and making and selling a variety of items from wire and, later, also sheet metal. The craft’s emergence and development from the 18th century onwards reflected the tough economic and social conditions in the poorest back-country areas in the north of Trenčín County (the Upper Váh and Kysuce), and later also the northern part of Spiš County. At the end of the 19th century wire craft was practiced in more than 150 communities in northwest Slovakia. Some wire craft workers operated only within Slovakia but others travelled beyond the borders of the AustroHungarian Empire and took a trade that had begun as a local phenomenon to nearly all the continents. Wire craft’s growth was halted by the First World War and it went into decline after 1918 because of competition from industrial products and the restricted opportunities for travelling. After the Second World War its traditional form was practically extinct. Artists and craft workers began to rediscover techniques for working with wire in the 1960s but renewed interest in wire craft really took off after 1990. There was new interest in the formal, technological and expressive development of the craft’s heritage which produced a significant advance on the decorative and creative level, taking the artistic value of wire work to a higher level than ever before. Wire can now be found in indoor and outdoor sculptures of all sizes, in jewellery, in craft design and in combinations with a huge diversity of materials. In cultural-historical terms wire craft is now seen as a specialised and distinctive technique of craft and art within our national culture that is also recognized on the international level. Wire craft and the wire craft community have always been a living source of inspiration, a space in which there was an intensive exchange of goods, and also an important channel for interethnic contacts and the international exchange of goods. Consequently, they deserve recognition as part of the intangible cultural heritage of Slovakia.

The element has been inscribed on the Representative List of the Intangible Culture Heritage of Humanity in 2019 under the name „Drotárstvo, wire craft and art“. 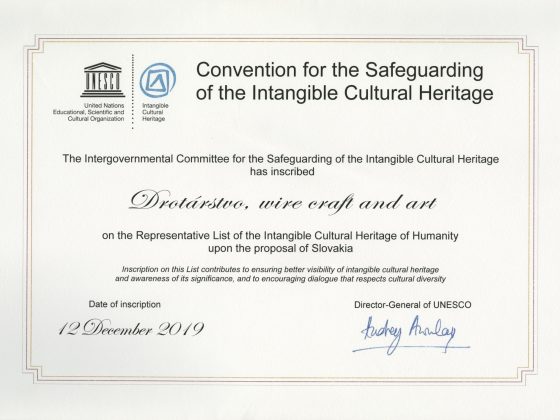