Rífová píšťala (from Slovak ríf – cubit, píšťala – pipe) is one of the most archaic types of musical instruments of the wide range of shepherd’s aerophones in Slovakia. This shepherd’s pipe – an edge-blown type of musical instrument without finger-holes – stood at the origins of this developmental series which, in spite of its relatively simple construction and ease of playing, has preserved its vitality and popularity in the regions where it has a historical background and, thanks to folklorism, even beyond. The specific tone row, which enables the technical and constructional disposition of the instrument, gave rise to a unique and extensive song repertoire, intrinsically tied to playing the shepherd’s pipe. This type of instrument can be found at several locations of the Slovak mountainous regions, settled on the basis of Wallachian law (14th–17th centuries). This phenomenon brought along (and created) an original Wallachian-shepherd culture, including its armamentarium, and the extremely variable and rich tradition of producing aerophonic instruments. With regard to direct inter-generational transmission of the tradition of producing and playing this type of pipe, special attention should be paid to the municipality of Brvnište (Považská Bystrica district). The music played by shepherds as the primary bearers of the tradition tied to the shepherd’s pipe has been preserved throughout the 20th century, and was followed by the younger male generation of the municipality. The more systematic interest in this instrument in Brvnište contributed to improving its playing characteristics thanks to innovative elements which were quite naturally, yet sensitively introduced into production by its producers. This musical instrument has found its place also in the field of folklorism and plays an important identification and integration role among Brvnište inhabitants who consider the sheperd´s pipe to be theirs. 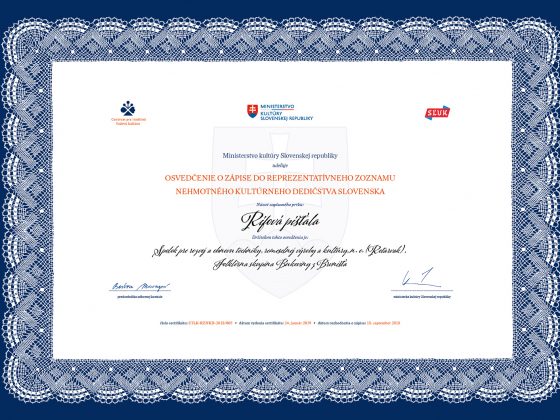