The term “Čičmany ornaments” refers to ornamental decorations of cabin houses in the village Čičmany as well as to the whole local decorative tradition including embroidery patterns. The decoration of houses in Čičmany has been inspired by a rich local embroidery tradition with its geometric patterns. It became especially important after a fi re in the village in 1920s: then the architect Dušan Jurkovič initiated construction and decoration of new houses. The paintings were made without sketching, at fi rst by white reddle, later by lime. They were useful because they served as protection against moisture, but they had apotropaic function as well: some geometric elements carried symbolic protective meaning. Later their meaning shifted to the level of decoration and representation. Čičmany ornaments played an important role in historical and cultural tradition in Slovakia. They became renowned representational element of national tradition. In 1977 a part of the village of Čičmany was declared a conservation area of folk architecture. Signifi cance of the ornaments persists due to this status of the village as well as inhabitants’ present interest in their cultural history. 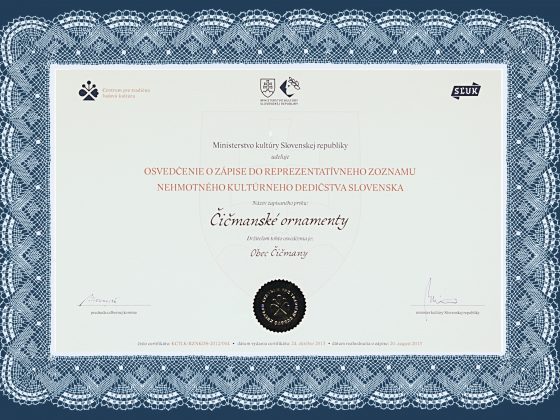